Skip to content
Where Does Your Olive Oil Come From?

Since 4000 BC, olive oil has been used in culinary, spiritual, medicinal and practical applications. Why has it sustained such an incredible tenure? And with it’s increasing popularity, where exactly does it come from today?

WHERE DOES YOUR OLIVE OIL COME FROM?
Olive oil is produced all over the world. Olives have been cultivated for over 6,000 years, originating in the Mediterranean and spreading throughout Africa, and eventually to the Americas and into Australia in the last two hundred years.

It is among the oldest known cultivated trees in the world – olive trees were grown before the written language was invented! Archaeological evidence shows that olive oil was produced as early as 4000 BC – talk about tradition!

Historically, olive oil was used not only for food, but for medicine, lamp fuel, soap, and skin care. It’s versatile nature and healthful properties has helped sustain it’s popularity throughout history and in today’s society.

Today, there are about 860 million olive trees planted on 22 million acres around the world. There is just one species of olive tree called “Olea Europaea” but hundreds of different varieties of olive trees. Some common varieties seen throughout the world are: Mission (US), Abequina (US), Frantoio (Italy), Leccino (Italy), Koroneiki (Greece), Picual (Spain).

OLIVE OIL AROUND THE WORLD
The majority of olive oil is produced in Europe with Spain being the largest producer followed by Italy and Greece. Spain cultivates more than 300 million olive trees covering an area of five million acres! Italy is the largest importer/exported of olive oil – it sells more oil than it produces.

Here is a percentage breakdown of the largest producers of olive oil in the world:
Spain 45%
Italy 25%
Greece 20%
California 0.5%
Other 9.5%

OLIVE OIL IN THE US
Olive oil has been produced in the US for more than 150 years. The states that grow and produce are California, Arizona, Texas, Georgia, Florida, Oregon, and Hawaii. There are approximately 45,000 acres of olives planted exclusively for the production of olive oil in the United States that produce about 5% of all of the olive oil consumed in this country each year.

The annual consumption of olive oil in the United States increased from 30 million gallons to nearly 70 million gallons a year in the last two decades – and is the largest growing market outside of the European Community! The domestic quality is getting better and people are putting more and more trust on locally produced oil. 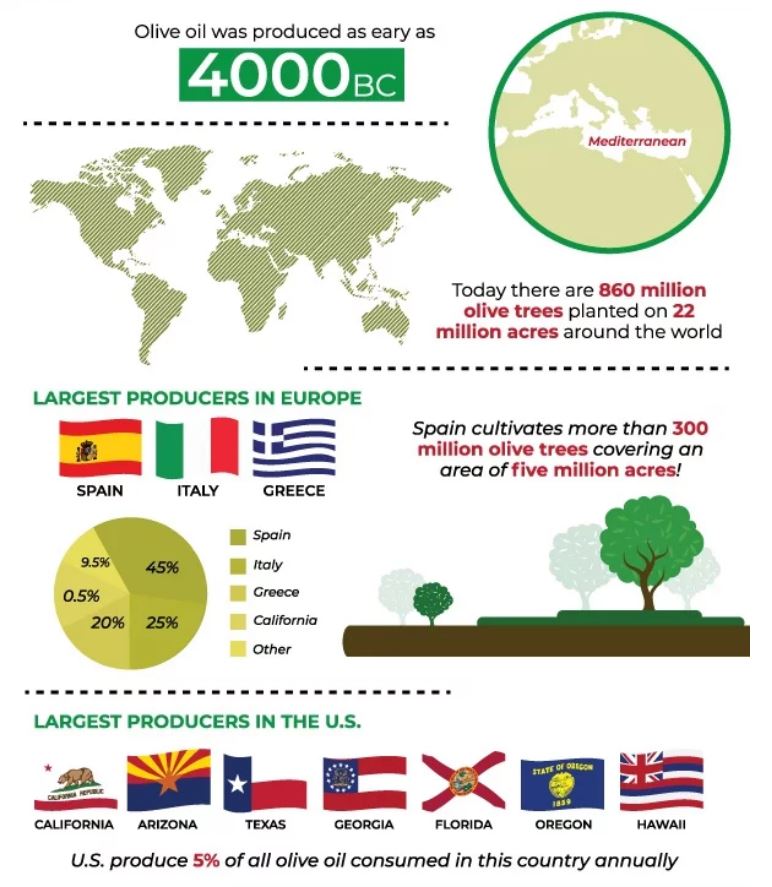