Skip to content
Where did Sea Salt come From?

Location is the most critical aspect of artisan salt making. The location determines where the sea water comes from to make the brine and the environment in which the brine is evaporated to create the salt crystals. The many variables in this process are what make each natural gourmet sea salt so unique.

Sea water varies in salinity and mineral content depending on its course through the oceans currents and the time of year at any given location. England’s Maldon sea salt collects its sea water for brine only during the spring tides when the sea water is at its saltiest and stores it in large holding tanks to draw from for the rest of the year to produce one of the world’s finest sea salts.

The evaporation process is what makes each natural gourmet sea salt truly exclusive to the artisan who makes it. Salt marches and clay pans are traditionally used as vessels in areas like Brittany and Hawaii where solar radiation is available to evaporate the brine. These two processes are extremely energy efficient and have the added benefit of greatly increasing the mineral content and flavor of the brine. 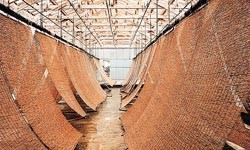 Of the many ways to evaporate brine, SUZU SHIO sea salt from Japan is made by a very special process. The clean collected salt water is sprayed over bamboo blinds, which are hung from the ceiling and reach to the floor. While the salt water runs down along the blinds, some moisture evaporates. The collected salt water at the bottom is re-sprayed again toward the bamboo blinds. Repetition of this process eventually produces saturated salt water. This is then transferred to a large stainless steel pot – about 7 feet in diameter – and crystallized over a gentle wood fire for the next two days to produce a traditionally moist Japanese sea salt.

The last important aspect of natural gourmet sea salt is texture. The formation of salt crystals is based on time, temperature and the salinity of the brine. The salt artisans craft becomes apparent as he orchestrates the conditions affecting his brine to harvest the salt crystals at just the right time to produce his signature gourmet sea salt. 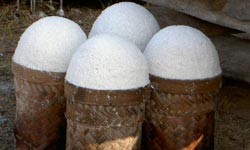 Some extraordinary examples of salt crystals with amazing textures come from the Balinese salt makers at Big Tree Farms. These salt artisans follow an inherited traditional process that has been passed down from generation to generation since the Majapahit Dynasty some 1,000 years ago. The Balinese produce sea salt in three distinct crystalline forms in large open salt pans under the Indonesian sun. The first is the Coarse Grain “Hollow Pyramid” crystals that are the natural product of the cool windy days marking the end of the monsoon rains. Fragile crystals are gently scooped from the surface of the brine to dry in the exposed wind and sun. This traditional harvesting process creates salt crystals formed in miniature hollow pyramids that display a truly distinctive texture and subtle flavor. The second is the Coarse Kechil “Baby Coarse Pyramids” formed when earth, wind, sun and water join to create a natural union that determines the unique crystal character of each salt grain. In Balinese, kechil means young or small. Coarse Kechil refers to the smaller coarse grains that appear during periods of hot mornings and rainy afternoons. The third is the fine grain Bali Fleur de Sel. Since ancient times, Fleur de Sel crystals have been treasured for their ability to heighten the flavors of any ingredient they meet. Bali’s Fine Grain salt crystals are produced in the dry season when the sun shines down on the black sand beaches causing rapid crystallization of the brine. In the early morning twilight, fluffy miniature snowflake crystals are harvested from the brine’s surface to dry as the sun rises overhead. This is a Fleur de Sel as fine and beautiful as any you will ever experience!

It is our hope that you have the opportunity to compare and enjoy all the natural gourmet sea salts this world has to offer. Once you begin to appreciate the various tastes and textures of artisan sea salts, you will discover flavors in your cuisine that most people only dream of.

About the Author: Riverbender Support