Skip to content
What is the history of salt?

Salt is essential to life. The chemical name for salt is sodium chloride or NaCL. Sodium and chloride are both electrolytes that conduct electricity and are found in the body fluid, tissue, and blood. In human health, electrolytes aid in a number of vital bodily processes. Many heart and nerve functions, muscle control and coordination, and the body’s ability to absorb fluids all depend on a healthy balance of electrolytes. 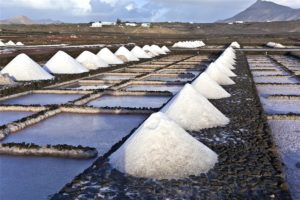 Pre-civilized nomadic man hunted and gathered food and maintained their sodium levels by eating red meat rich in electrolytes and did not need mineral salts to supplement their diet. They used the available salt as a medicine to heal wounds and as a chemical to cure hides and set dyes. Once man became civilized and began farming their diet changed as they grew fruits, vegetables and grains as their staple foods. Halite or mineral salt then became vital as a food preservative, flavor enhancer and sodium supplement to their diet.

Salt in great quantities was relatively rare and found mostly in deserts at that time. Salt trade became big business and trade routes were established to bring salt to major cities in exchange for slaves, gold and other valuable items. Salt has also played a role in mans most scared ceremonies to please the gods and to celebrate everything from marriage, childbirth, the solstices and planting and harvest seasons. Salt became so valuable at one point in history that it was traded ounce for ounce for gold. City states waged wars over salt supplies and taxed the salt use of its citizens.

Salt equaled wealth and independence and over time new ways to acquire salt were developed. The first new development in salt manufacturing was mining halite underground which was a costly and dangerous way to extract the mineral. Flooding a coastal plain with sea water and allowing it to evaporate became a popular method of gathering salt but these franchises were very exclusive and carefully regulated. Diverting water 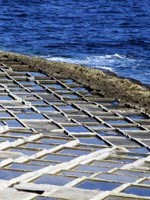 into halite rich pits was first developed by the Chinese who pumped the salty brine out with bamboo pipes for solar evaporation. Heating clay pots of brine in fire to evaporate the water and leave the salt was the next step in the evolution of making salt.

From the earliest civilizations to modern times man has imported or manufactured salt as a basic necessity of life. Modern industrial salt manufacturers utilize technologies that filter the brine and evaporate the water from it so efficiently that they can create an almost pure product. To this pure sodium chloride are added up to 0.01 % potassium iodide to prevent iodine deficiency disorders such as thyroid goiter, 0.04 % dextrose to stabilize the potassium iodide and 2% sodium ferrocyanide as an anticaking agent to create free flowing common table salt. These additives serve a useful purpose but they also inhibit the normal absorption of the sodium chloride and may be responsible for salts association with hypertension and hyperthyroidism.

Today’s artisans produce gourmet salts in much the same way they were made thousands of years ago. Arguably the finest sea salt in the world, Fleur de Sel or Flower of Salt from the coast of Brittany has been harvested by hand in this region since the year 868. This ancient and unchanged salt making process begins with salty ocean water from the Atlantic being carefully guided 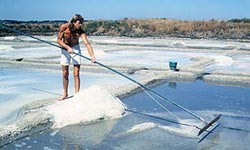 into shallow marshes through a complex series of winding waterways. Along the way the water is held in a basin, called a vas’re, it’s then funneled into narrower channels, and ultimately into the marshes, the oeillets. Starting out, ocean water has roughly 27 grams of salt per liter, but by the time the water makes it way into the oeillets, it’s far saltier, containing 300 grams of salt per liter. In the marshes, when the water evaporates to a depth of about 1/2 to 1 centimeter, a fine layer of salt collects on the surface, and is delicately raked up with a lousse ‘ de fleur, designed to disturb the tender crust as little as possible during the process. The salt is raked by specialists, a job entrusted only to experienced salt workers called paludiers.

On those certain afternoons when weather conditions are just right, a lacy-white film forms on the top of the salt beds. This is the precious Fleur de Sel. It must be harvested on the same afternoon it is formed. Each marsh can yield about 1 kilo of Fleur de Sel per day when it can be gathered at all. A gust of wind or a heavy handed paludier will send these delicate crystals to the bottom of the oeillet where it will be harvested as Sel Gris the coarse grey sea salt favored by French chiefs for generations.

About the Author: Riverbender Support